(DOCUMENT) – Electoral Amendment Bill – An Analysis of the Bill, and of the Memorandum Thereto – by Michael Atkins 16 Feb 2022

Following the New Nation Movement judgment in the Constitutional Court, Parliament must amend the Electoral Act 73 of 1998 in order to remedy the constitutional defect that restricts election to the National Assembly and Provincial Legislatures to those people duly nominated for such by political parties who gain the requisite support in elections.

This amendment must be effected within 24 months of the judgment, dated June 11, 2020. A Ministerial Advisory Committee was constituted during 2021, and held deliberations, before presenting two options to the Minister in June, 2021. On December 31, the draft Bill was presented, embodying the “Option 1” presented in the MAC Report.

This analysis seeks to examine the particulars of the Bill and to evaluate it in relation to the constitutional imperative that our electoral system must result, in general, in proportional representation.

While the concept of proportional representation is clear and unambiguous (in its various forms), the term, “in general” is difficult to delineate precisely in relation to the extent to which an electoral system conforms to proportionality. It will be necessary to articulate principles by which this may be evaluated. One approach that partly addresses this need is to apply numerical measures of disproportionality to prior elections, which may be deemed to satisfy the constitutional standard of “in general, proportional representation”. Any proposed system can then be modelled against the same measures, and the outcomes compared with levels of disproportionality that are “acceptable”.

The concept of proportional representation, by definition, excludes the notion of individuals, and hence independent candidates. What the Bill does is to treat individuals as political parties, but partially conceals this by placing independents as candidates only within provinces. The only means by which individual representation can be included is by separate individual elections, which are then balanced by compensatory seats to achieve overall proportionality, as happens in local government.

The inclusion of individuals on proportional lists inherently introduces distortions of proportionality, with no particular limits or constraints to this distortion. In addition to the built-in distortion, the manner in which the Bill implements this approach adds further deviations from proportionality.

The principal effects of the approach and the implementation is that independent candidates face a significantly higher burden to secure election to the National Assembly and to Provincial Legislatures than to political parties, but also that the largest political parties benefit substantially, at the expense of smaller parties. While there is always a degree of variability of effect for any particular numerical patterns, the disadvantaging of independent candidates and the advantaging of larger or dominant parties are clear, mathematically verifiable features of the proposed system.

The electoral system proposed in the Bill has been modelled against prior elections, without including independent candidates, and there is a demonstrable, unambiguous outcome where disproportionality increases substantially, and the largest party receives a “bonus” of between 4 and 8 seats in the National Assembly. The 2019 National and Provincial elections have been modelled with the inclusion of hypothetical independent candidates, and the two effects of distorting proportionality and benefitting the largest parties are amplified.

Option 2 advanced by the Ministerial Advisory Committee, consists of 200 single-member constituencies, with proportionality effected by a separate proportional representation vote. It can be noted that it is feasible to implement this system without re-drawing ward or municipal boundaries. Such constituencies could be contained within metro municipality or District Council boundaries, with a few exceptions where small District Councils are combined to form zones for National Assembly constituencies.

The Bill proposes a model that is fundamentally unsound – inserting individuals directly into a proportional representation system is simply a contradiction in terms. That this creates distortions and results in unforeseen consequences, is not a surprise.

The proponents of this system, and the drafters of the Bill, rely incorrectly on the New Nation judgement to justify mixing individual representation within a single electoral system, rather than combining different systems in such a manner as to maintain overall proportionality.

It is important to separate the unsoundness of the core principle from particular choices made in the implementation that compound the inherent problems. Addressing specific problems may improve some outcomes of the Bill, but they will not cure the fundamental logical defects of the proposed system.

In particular, the exclusion of independent candidates from having their remainders compete with those of political parties, and the fact that the 200 compensatory seats are calculated separately from the 200 regional seats for the National Assembly are significant faults that can be corrected, but this does not render the proposed system viable.

While no system can be perfectly proportional (as one cannot have fractions of seats), the current system constrains any disproportionality within clearly defined limits. Treating individuals as political parties inherently magnify disproportionality, but without clear constraints. This means it is not reasonable to describe the resultant system as being, in general, proportional representation.

Aside from violating the specific constitutional mandate on proportional representation, the system proposed in the Bill raises other constitutional questions by placing unnatural barriers in the path of independent candidates, and by advantaging larger political parties at the expense of smaller ones. 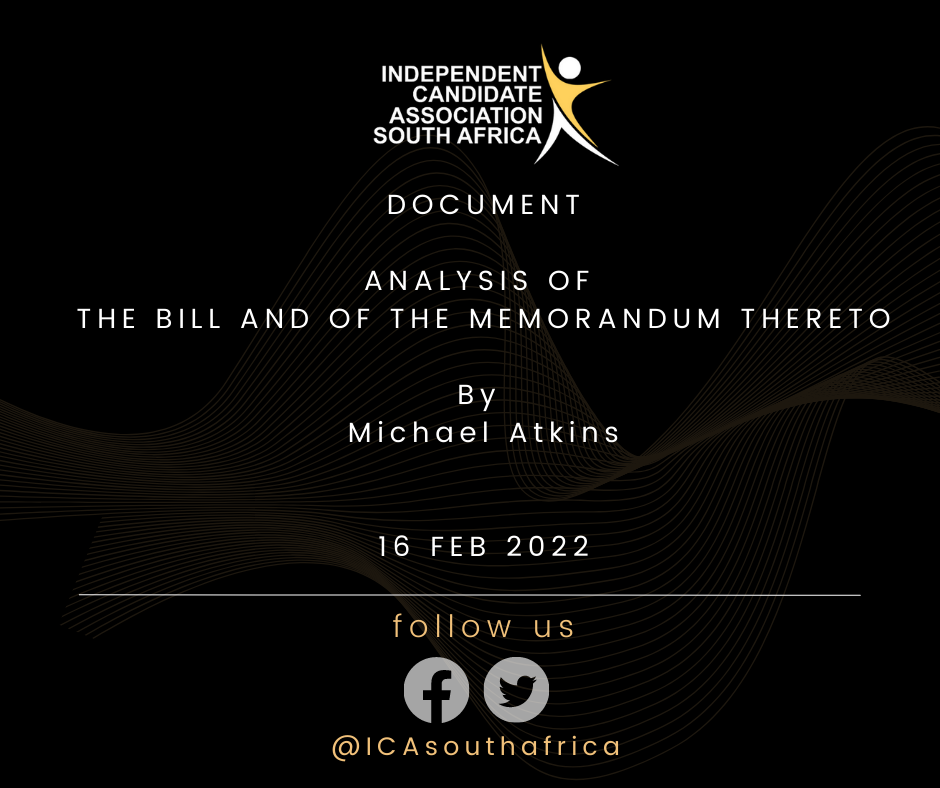